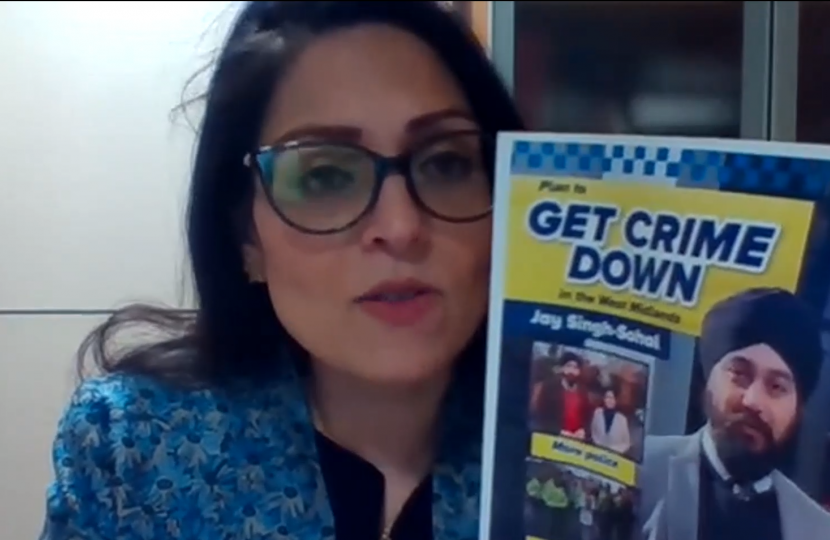 The Home Secretary Priti Patel has launched Jay Singh-Sohal’s campaign to become Police and Crime Commissioner in the West Midlands, saying he has a “brilliant plan to get crime down”.

Priti Patel endorsed Jay’s proposals to stop Labour’s police station closures in areas such as Aldridge, Solihull, Sutton Coldfield, Tipton to ensure we have a strong local police presence on the ground on top of the recruiting of more police officers, more neighbourhood policing as “this is what matters to local residents”.

Jay Singh-Sohal, a 38 year old Army Captain from Sutton Coldfield is campaigning in this May’s elections to become the next Police and Crime Commissioner, after nine years of a Labour PCC.

He will deliver more police officers on the streets and in every neighbourhood, work with the government to target resources more effectively to tackle rising crime, and deliver less politics by abolishing unnecessary roles like the controversial £68,000 Deputy PCC.

“As Home Secretary my priority is to make Britain safer and for that I need a strong local Police and Crime Commissioner in the West Midlands.  Jay will put public safety first, he has a plan for the West Midlands to increase police numbers and deploy them across the whole of the region in order to focus police resources into effectively targeting crime.”

“For years, residents' concerns about rising crime have been falling on deaf ears at the Labour Police Commissioner’s office, that crime has increased by a third over this time speaks volumes for the failed approach we’ve seen.  We have a real opportunity now for a proactive and robust approach and not pussyfoot around crime prevention and deterrence.  There is a clear choice for our residents on Thursday 6th May and I represent a tough new approach to get crime down.  I will bring about this much needed change to better serve taxpayers, by working constructively with the government to put resources into tackling the range of crimes affecting people all over the region.”

“It’s absolutely critical for me that West Midlands is firing on all cylinders, it’s such a big force, it’s so much a part of the national picture that I’m not going to hit my targets unless West Midlands hits its targets. And I would really welcome having a partnership with Jay to do that. It would make a huge difference to me and to the national fight.”

Analysis shows total recorded crime has increased by 33% over the past five years under the Labour PCC, from 242,553 cases in 2015 to 322,797 in 2020. More than 40 police stations have closed while resources have been diverted into the central Birmingham headquarters, where the PCC’s office has doubled its budget.

Jay Singh-Sohal has pledged to reverse the Labour PCC's push towards centralisation and will move functions out of large, costly offices in central Birmingham, into local neighbourhood bases like Solihull and Sutton Coldfield.

Unveiling his plan alongside Priti Patel, Jay will:

●     Ensure that victims of crime are given they support they need

You can watch the launch event video via this link.

I entered the WM PCC race with a clear objective: to tackle record levels of rising crime across my home region, and to deliver more policing and less politics as Police and Crime Commissioner.